Through an EU-wide survey with efficiency experts from all Member States, intense document screenings and a business stakeholder consultation, 28 country reports have been developed. The reports analyse the situation and legal background in each Member State while combining good practice examples with concrete policy recommendations.

Illustration : Photo by jannoon028 on Freepik

The European Union is committed to saving 20 % of its primary energy consumption by 2020. A range of policies was adopted in the past decade to achieve this target, among them the Directives on energy end-use efficiency and energy services (ESD), on the energy performance of buildings (EPBD) and the Energy Efficiency Directive (EED) as well as the Ecodesign Directive and the Energy Labelling Directive. As a part of the ESD and EED implementation, the Member States had to submit three National Energy Efficiency Action Plans (NEEAPs), scheduled for 2007, 2011 and 2014.

Starting in 2006, Energy Efficiency Watch (EEW) projects accompanied this process. The EEW facilitates the implementation of EU energy efficiency policies by collecting information on this process and by providing this information to a variety of stakeholders, including European, national, regional, local policymakers and experts.

The EEW is co-funded by the Intelligent Energy Europe Programme and coordinated by Eufores. The current project (EEW3) runs from summer 2014 to summer 2017.

One key activity of the EEW3 project was an extensive survey on the implementation results of the second NEEAPs in the 28 Member States. The aim of the survey was to learn from stakeholders and experts how they see the progress of energy efficiency policies and their implementation in different sectors since the second NEEAP in their respective countries. It was carried out in the first half of 2015. A similar survey was done in 2011/2012 as a part of the EEW2 project.

In total, more than 1,100 experts from all 28 EU Member States were consulted about the progress of energy efficiency policies in their own country in the last 3 years. 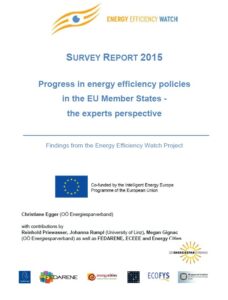