Brussels, 28 April 2016. FEDARENE along with five other major networks of local and regional authorities has released a joint statement on the governance of the EU’s Energy Union, as the issue is being widely discussed just days after the close of the official public consultation period. In their statement, the networks call upon the European Commission and national governments to intensify their work with local and regional actors in the design of future national energy and climate plans and thereby to move from a policy of “action by a few to action by all.” The paper points to the crucial role of local and regional governments in delivering energy policies and warns that failure to formally recognise this in the Energy Union puts both European and national climate targets at risk. The networks thus call on the European Commission to include a chapter dedicated to multi-level cooperation in the guidance documents on planning and reporting of national energy policies which it will provide to national governments.

Citing the success of the Covenant of Mayors that has resulted in action plans on sustainable energy in over 5000 municipalities across Europe, the paper flags cooperation between governmental levels and stakeholder segments as key to designing high-quality national action plans. These national plans, in turn, are essential to reaching the international goals set out in the Paris climate agreement signed last week by 175 countries. The networks go on to suggest the integration of existing local level planning and reporting in national-level plans, as this would both save resources and guarantee the policy coherence which is so important for the successful deployment of the Energy Union.

The EU is currently revising the planning and reporting requirements for its future energy policy. The result of these revisions will not only define how national governments design their energy and climate policies in the post-Paris agreement reality, but also who they will have to involve in the process. The joint statement underlines the fact that cities, as the level of government closest to the people, will be critical in defining, implementing and enforcing regulations and measures emanating from the Energy Union strategy. Unfortunately, cities often do not have the authority to enforce binding legislation. In the words of Deputy Mayor Wijsmuller of The Hague in the Netherlands, “In order to fulfil our goals, the city needs a strong EU climate and energy framework and leadership from EU policymakers.” The paper makes clear the essential nature of multi-level cooperation, consultation and planning. 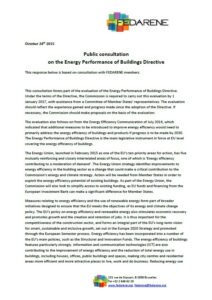