Berlin Declaration of FEDARENE – Stand together for a united Europe

The members of FEDARENE commit to supporting the European idea with their resources and by cooperating with European partners within and outside of the association.

We as members of FEDARENE, the European Federation of Agencies and Regions for Energy and the Environment, would like to declare our clear and immovable commitment to a united and sustainable Europe.

The European Union was established with the vision to ban the threat of war and ensure lasting peace and cooperation.

Since that time, a comprehensive number of initiatives on improving social, economic, environmental and regional policies have been developed and implemented for the benefit and the well-being of European citizens.

Currently, Europe is facing considerable challenges on a national and global level. Overcoming these challenges will require the commitment of member states, regions, municipalities and citizens. The common European idea must not be rolled back in favour of nationalistic and protectionist visions, as this will lead to irreversible setbacks, destroying all positive achievements made in the last 60 years.

We believe that the European Union and the constructive cooperation of its members is the only way to fight climate change, to achieve higher common standards towards a modern low-carbon economy and with this to assure a sustainable future for all. The 2030 Energy Strategy of the Energy Union and the achievements reached so far are an indicator for the success of cooperation in a
united Europe.

The members of FEDARENE commit to supporting the European idea with their resources and by cooperating with European partners within and outside of the association. We will:

In our view, the European Union is crucial for a successful and sustainable common future. All of us are called upon to build this future together, and the members of FEDARENE commit themselves to jointly contributing to this goal.

This declaration is based on consultation with the members of FEDARENE during the FEDARENE General Assembly 2017. All the FEDARENE members adopt the declaration “Stand together for a united Europe”.
Berlin, 1/06/2017 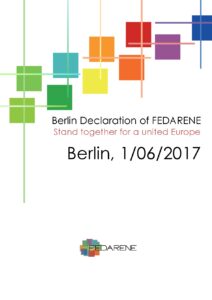 FEDARENE expresses its support to Ukrainians in a short statement, reminding how essential European solidarity is in the face of this terrible war.
Read more >>

On the 1st of June 2017, the members of FEDARENE during their General Assembly adopted the “Berlin Declaration of FEDARENE -Stand together for a united Europe.
Read more >>