The design of Triple Function Substations in combination with RELaTED technologies

Ultra-Low temperature DH introduces multiple benefits at the network level, as the reduction of heat losses and the improvement of heat generation efficiency…

During the development of the RELaTED project, several Triple Function Substations (3FS) have been evaluated and designed. Those were investigated in different versions, connection schemes configurations and operating modes depending on the district heating characteristics, the building types and the heating technologies used.

This includes the design of Triple Function Substations (3FS) in combination with different RELaTED technologies:

During the development of the project, it was found that there is not such a single 3FS substation design, but that the unit main design characteristics depends not only on the load levels but also on the type of DH networks and the type of heating system the 3FS is placed in. The possible concept designs of the 3FS were grouped in the following case scenario:

During the development of the RELaTED project, several Triple Function Substations (3FS) have been investigated in different versions, connection schemes configurations and operating mode.

System and flow diagrams for each case were proposed. In the case of a 3FS for ULTDH connected to existing buildings equipped with BILTST, a maximum of eleven possible theoretical combined operational modes were found. In this specific case a more detailed Process and Instrumentation Diagram (P&ID) was initially proposed.

Belgrade (Serbia). The demand specification of a Two-Function Substation (2FS) specifically adapted for the Belgrade primary school demonstration site was prepared. Control strategy and process diagrams were developed and a mechanical design was proposed. The unit is being currently built and it is expected to enter into operation before the end of Q3 2021.

Taastrup (Denmark). The demand specification for three different district heating substations was prepared. This includes process and instrumentation diagrams, flow chart, control specifications, bill of materials and mechanical design. All units were installed in Taastrup, and they are operating on the same heating grid but alternative applications. 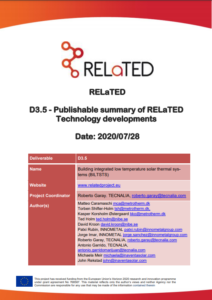