The 2nd OPENGELA newsletter is out! Check out the latest news on Basque urban regeneration.

The 2nd edition of the OPENGELA Newsletter starts with the interview of Miguel de los Toyos, Deputy Minister for Territorial Planning and Urban Agenda of the Basque Government.

Miguel de los Toyos took office as Deputy Minister of Territorial Planning and Urban Agenda of the Basque Government last March, after leaving behind the post of Mayor of Eibar, which he had held since 2008. Therefore, his knowledge of the Opengela project is complete, both from a municipal point of view and a wider coming from the responsibilities of his current post.

In this interview, he gives his point of view on the progress of the project, coordinated by his department of the Basque Government, which implements neighbourhood offices to undertake urban regeneration processes and is financed by the Horizon 2020 programme of the European Commission. Otxarkoaga (Bilbao) and Txonta (Eibar) are the pilot schemes, and the process to replicate the model in other places has already begun.

In this edition, you will read more about the following: 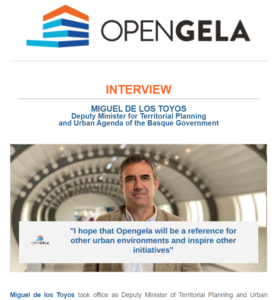 The urban regeneration taking place in the Basque Country, thanks to OPENGELA is in progress. Check out where the work is at.
Read more >>

To replicate the OPENGELA model, it is necessary to lay the foundations for neighbourhood offices to operate. For this reason, the project has published a ‘White Book’ summarising the basic principles that should govern the one-stop-shops.
Read more >>

«I hope that Opengela will be a reference for other urban environments and inspire other initiatives.» said Miguel de los Toyos, Deputy Minister for Territorial Planning and Urban Agenda of the Basque Government. Read the full interview.
Read more >>